Now I must have had my head up my arse for the last 2 years, as it’s only just become news to me that a smartphone watch called the Pebble has held the title of “The Most Funded Kickstarter Project” throughout this time, only recently being knocked off the top spot by the re-invention of the drink cooler.

Now I won’t go into details about the amazing Pebble kickstarter campaign, as there’s enough information about this floating around the internet, though there is an interesting article about this that contains an interview with the CEO of Pebble that you can read here.

I’ve always been a fan of technology doing more than it was originally intended to do. Incorporating technology from other walks of life into a single device has always pleased me, as I get a sense of power and value for money. Which is why I’ve always loved the development and current state of smartphones. When mobile phones went from only being able to take calls to being able to play music and take photos, I was simply amazed. Throw in a decent cpu & gpu, hd touchscreen, wifi, accelerometer, nfc, mhl plus apps and you have a powerful entertaining, business profitable, life support machine. I struggle to think of anything else that can also go into these phones, which already incorporate every other handheld electrical device that has been invented over the last 50 years.

So when a watch comes along, saying that it can do everything your phone can do, though only when it’s connected to a phone, I’m a bit dubious as to it’s real capability. Now I’ve known of smartwatches for awhile now, apparently the Pebble was the first ever one for both Apple and Android, but the Chinese have been knocking gear out like this for years. Yet, phone companies are now making a big push into the smartwatch market, making us believe they are leading the initiative, and are charging a premium on watches that I don’t believe deliver on their promise.

If I want a watch to behave as a mobile phone, I’ll get a mobile phone that is a watch, which is exactly what I do have somewhere in a cupboard in the house. For £40, I was able to purchase a mobile phone watch from China that could make calls, touchscreen, send texts, browse internet, play music, take photos and record video, contained a speaker, headphone socket and Bluetooth. Its only downfall was that it didn’t have wifi, but for 40 quid, and considering this was purchased 2 years ago, I still regard that as a right bargain. I’m sure by now, these mobile phone watches will have been updated to support wifi, still selling at the same price.

However mobile phone manufacturers are charging between £100 to £350, basically the price of a new mobile phone, for a watch that isn’t actually a mobile phone. No thank you please, matter settled!

That was until I spied upon the Pebble watch the other day. 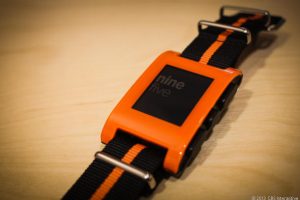 Orange version of the original Pebble

I had to wrestle with myself to not rashly buy on impulse, which I’ve done many times before. What sets this smartphone watch apart from the others, is the brilliant e-ink display. I’m a massive fan of e-ink, being very energy efficient and looking absolutely amazing for functions requiring display in black and white. The greatest thing with e-ink though is that once the display is turned on, it doesn’t really require any further energy to stay permanently on, apart from the occasional screen refresh, so it stays turned on forever. This means you can actually look at your wrist to get the time straight away, instead of having to press a button on the side to turn the display on, which quite frankly, if your going to do that, you may aswell whip your phone out of your pocket and press the power button on that to get the time and save yourself a 100 quid.

Another great thing about the e-ink display using very little power is that the battery lasts a lot longer than regular smartphone watches, with a life of a week between charges compared to other watches that require recharging every 2 – 3 days. This watch comes with built-in Bluetooth to connect to your mobile, allowing for notifications to come through and to read text from SMS and facebook messages. The watch is waterproof to 5 ATM and able to light up with a simple flick of the wrist. It also has the ability to download apps from your phone, such as games, health monitor apps and watch faces that allow you to display the time anyway you want. 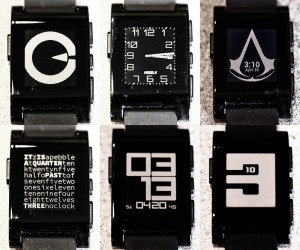 Now, I like this watch very much. The customisation and design of the watch is a dream come true. Yet it was a good thing I held back from buying this watch outright, as it turned out with a little further research, for the same money of about £100 to purchase one brand new, I could pocket a mint condition second hand Samsung Gear 2, which is specialised to work exactly with my current series of phone, the Samsung Galaxy S4. The Gear 2 is much more functional, with a built in camera, mp3 player, speaker and microphone to actually make calls from, Internet explorer, the ability to type and dictate messages, colour touchscreen, plus much, much more. 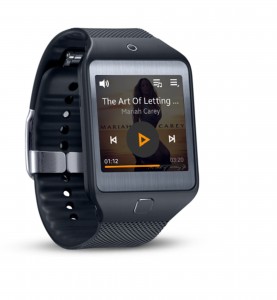 Torn between the two devices, I’ve decided not to purchase either of them. I’m just going to see how the market plays out and if a cheaper alternative comes out, or I could possibly revert back to the actual mobile phone watch I already own, which can do everything a mobile phone can, but at the mere price of £40!

I’ve since purchased an orange version of the Pebble for £75 from ebay. Had it now for about 2 weeks. First impressions are that it is alright. Couple of teething problems with notifications, but most of these have since been ironed out. The design is cool and the multitude of watch faces are fascinating. Can even install a couple of basic games onto it. Have purchased a new strap for it as the current one is not the most comfortable and am looking at creating my own watch faces. I tried holding back from purchasing this, but the need for a new watch over powered me. I’m so weak willed! 😛 [/important]