Well I find myself still thinking about the Lethal Weapon TV show months after the second series finished and how since, the magic has disappeared. What with the ruckus of Clayne Crawford being dismissed from the show’s casting, who only found out via social media, I was sure this was all a ploy for a surprise reveal in season 3 for a return of Riggs from the grave, but having since checked the Internet on roughly a monthly basis on the production of the show since the news of Crawford’s firing, either the entire studio is in on covering up this secret reveal to the absolute end or the vehement hate on set was actually as barmy as all the stories that have since been leaked.

It’s hard to choose sides between who was in the right or wrong, as each new article released casts new light on everyone’s behaviour on and off set, so probably best to put it down to the studio’s fault for allowing this to get so out of hand. We’ve got stickers of Crawford as an emotional terrorist, a tape of Crawford calling Wayans a ‘Pussy’, Wayans’ faking illness, purposefully not turning up on set to film during an episode that Crawford was directing, etc. The stories go on and on of what occurred. It’s a shame to learn of so much hate behind the scenes for a show that was all about sharing the love and helping one another when in need. I thought the on screen chemistry looked fantastic between the pair. Crawford and Wayans were a perfect shoe-in for Gibson and Glover, bringing the same great energy and rapport that we saw in the films.

I remember back to when the show was first announced, I couldn’t wait to see the first episode to see how they would pull it off. Having seen all the films as kid, I couldn’t see how it would be possible to emulate and improve upon what had already been perfected in the movies with Hollywood actors and million dollar budgets behind them. Well I was nicely surprised when the first episode blew me away with stunts, gun fights and chases. Having said that, the number of bullets the stars took in that first episode was a bit daft considering they were making such a big thing over Murtaugh’s heart condition, but after a speedy recovery, the show managed to hold back on the amount of damage that was dished out to the stars. Since that first episode, the action hasn’t stopped, with some THE best stunts I have seen yet on the big screen, and this goes for many big hollywood films out there, that now rely purely on CGI for the smallest of stunts, so big congrats to the teams involved for those shots. The plot in the first season was great, building the character arcs for Riggs and Murtaughs with their personal anguishes, injecting some parts from the movies, whilst doing a really good job of developing a more in-depth plot that you wanted to follow. The second season’s plot I felt slowed down quite a bit, becoming a bit stale but I can’t imagine you can do a like a like for each of the films released per season let’s say. There was also this thing towards the end of season two where even the character’s were aware that they were stuck in a tried and tested formula of calling out a bad guy from a couple of yards away, who then bombs it, cue chase scene, and bad guy caught for questioning. Other than a few small gripes, the show was up there for fantastic, tight-knit production values.

Some of my favourite episodes from the two seasons would be; The episode with JoJo. That was a surprise appearance, and throughout the episode I was convinced the actress had a striking resemblance to JoJo (lo and behold). She was stunning and the episode, starting with a car rolling down into someone’s swimming pool and ending with a great car chase, had some good scenes of Riggs connecting with someone who needed emotional support. The first episode of season two, with Murtaugh across the border to support Riggs taking down the man who’d ordered the kill on his wife. The misfiring of the bazooka on the church was absolutely hilarious. Just pure carnage throughout the episode. And to finish off the examples, the one where Cahill has a stalker. Think a house is blown up at the end. Credit to all actors throughout the two seasons, having done a fantastic job of bringing their characters to live, even those with just 3-4 minutes of screen time. Also shoutout to the beautiful bikini-clad models that would be in shots at the beginning of an episode at either a generic pool party or down by the beach.

When I now watch the movies, they just no longer compare to the TV show. I honestly think the show has managed to take the crown. The films now look rough in comparison, with Gibson not insane enough, the jokes lackluster and the stunts involving blue screens etc. Considering what the show has achieved on a smaller budget for writing and stuntwork, its phenomenal. Regarding music, the soundtrack has been fantastic in all episodes, but I would have to say it’s a shame that they couldn’t return to grass roots at least once and have some sax playing just as in the movies for old-time sakes. That sax would really helped to build the atmosphere at times. It’s also a shame we no longer heard Murtaugh’s catch phrase “I’m too old for this shit”, only coming close in one episode but hushed before he can say the word ‘shit’, what a waste, but I think in hindsight that catchphrase is now more associated to Glover than to Murtaugh these days.

As much as I really want to hold out on a ludicrous theory of this all being a ploy for a surprise return for Riggs, it’s certainly gone way beyond that now. Things have been said that can never be taken back. I think part of the problem was that they called the show Lethal Weapon to begin with. They should have just giving all the character’s different names, and whatever it was called would have been an absolute success on it’s own on the back of the acting and stunts rather than having to rely on what was previously a dead franchise. It’s now a case of Sean William Scott taking over the lead role as a separate character, which I just can’t see going well for a show whose original premise was about two initially mismatched cops called Riggs and Murtaugh. Oh well, those first two seasons will shine brightly in my mind’s eye whilst not being tarnished by the 3rd as I won’t be wasting my time with that sludge.

All the best to Crawford in the future, hope he can land on his feet in another production as he’s a top notch actor. Just tone down the attitude on set and watch what ya say in future, as you never know whose phone’s recording in their pocket. 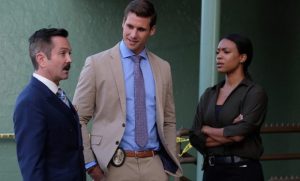 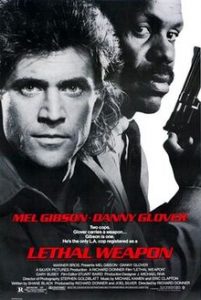 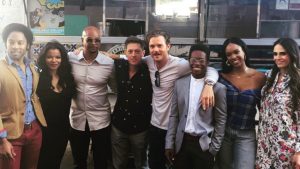