Remakes of films are always open to opinion on whether the hype, money and effort was exactly the new face lift the current generation of today needed or an utter fail. Star Trek, Total Recall and Judge Dredd, all popular 80’s/90’s sci-fi films with a cult following, were some of the first to be remade pro-2010. I was originally behind the idea that the directors and producers wouldn’t be able to possibly capture the original awe, action and appreciation these films had managed to generate, but having since seen these, I’ve been ass kicked out of my cinema chair and dragged screaming delight through an amazing computer generated experience of ass-kicking gun fights, not-too-distant futuristic glossy technological concepts, plus dollops of unthinkable camaraderie. In away, the original films have nothing on their new, sleeker, sexy, thrilling counterparts.

Of course, this hasn’t always been the result. The Man of Steel, an alright film in it’s own standing, just doesn’t compare to it’s doppelganger. Footloose, ok it’s not sci-fi, but it still stands as a classic, fucking ruined. 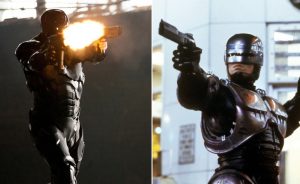 So what about the new Robocop film then. I have to be honest, I was never really a fan of the films or cartoon series. Yeah, robots are always cool, but I was never able to get behind the original story, probably because he is just too rigid a character to be able to like. Well this film helped to blow away with the rigidness, and give Robocop a fresh lease of life. By using the real-world references of current politics, military action and tomorrows technology, the film was able to do a very good job of drawing the viewer into what felt a very realistic environment. Robocop himself was slicker and more personal, which itself was a question throughout the film of whether he was human or robot, a ghost within the machine. I would say that this film relates very closely to Dredd, one of my favourite films, both containing stoic main characters with a firm fist on delivering justice, motorbike scenes, handguns being the choice of weapon and being set in the future. The big difference between these films is the scope of the area and enemies that they cover.

A lot of films that hit off and become high flying series, are because they started small and progressively expanded throughout with a wider story, more destruction and greater enemy threat. Such as Die Hard, this originated in a tower block, then onto an airport, next a city, then over a state until it then went international. Dredd was brilliant in being able to capture essentially the day in the life of an ordinary Judge, most of the action occurring in one tower block, with the bad guy/(women) being a lowly drug lord. I don’t know if Robocop went too far straight away in the remake with the enemy eventually being essentially the most powerful person in the world (hopefully I’m not spoiling too much for those yet to see it). I myself could not see how Robocop can now top this, and couldn’t possibly see a sequel transpiring. Of course if they hadn’t of gone down this route for the film, it probably would have just felt like another rubbish film to join the original instalments. Dredd on the other hand, could of course go further, going down the predictable route of a high level corrupt official etc, but I’m sure the 2 hour chase of cat and mouse will be hugely adrenaline fuelled. Massively routing for this to happen, but I’m digressing. 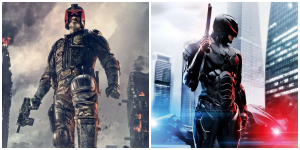 Essentially, Robocop is a must see. A very good film and an even better film than the original. Let’s see what other remakes have in store.