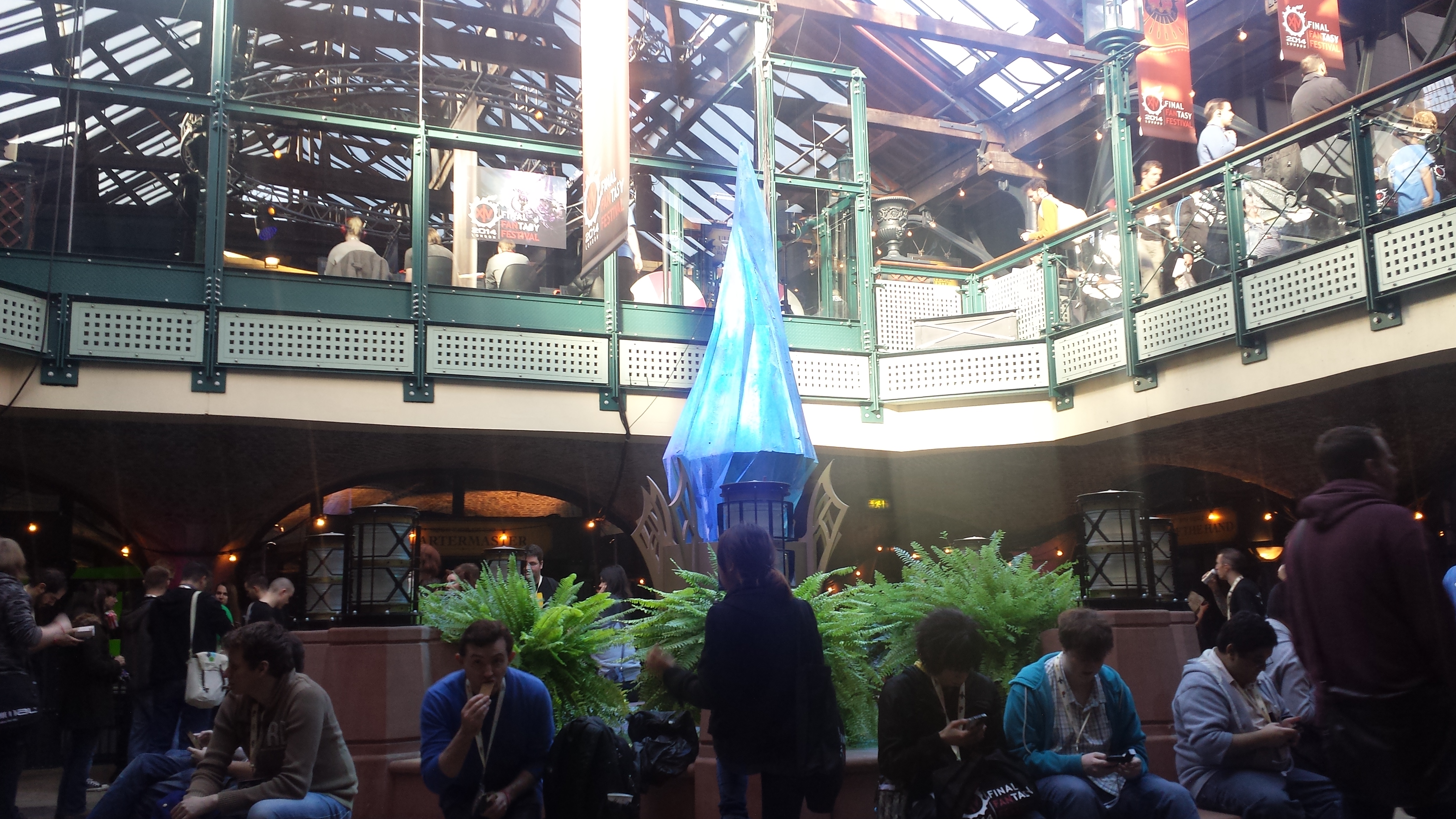 So I’m currently blogging from the Tobacco Dock in London at the Final Fantasy Fan Fest. Whilst the queues are long with anticipating players, I thought I’d sit down for 5 and catch my breath.

The event is pretty big, filling out most of the venue, which is quite an achievement considering the size and numbers of floors of this place, and the organizers have done a good job of flushing it out with plenty of themed stalls based on the game, containing fun activities such as archery, behemoth bucking bronco, hair styling/face painting, galleries and so much more.

From what I’ve seen, rooms are filled with over 100 PCs as Free Companies, friends and soloists (including myself) take on the likes of the Primals, in the hopes of being able to win a special edition T-shirts. So far I’ve failed at beating Odin and yet I can honestly say that even though I’ve actually had my hand out of the game for quite awhile, I was still able to last through the fight with no falls, only to wipe myself out when the last tank fell. Would try again but the line’s about an hour long.

I’m absolutely gutted about arriving late this morning to the event, as I missed the opening ceremony with all the juicy announcements, and better yet, I get to miss the closing ceremony as I have to leave early to get the train home. So looks like I’ll only make it to one of the developer panels. Not exactly how I’d wished this day had gone, but considering the schedule only came out last week, and I bought my ticket 2 months ago, I wasn’t to know. Otherwise I would have stayed overnight to make the most out of the day, but considering that would have cost quite a hefty sum, I wouldn’t have bothered going in the first place. Looks like the only way I’ll be able to properly catch up on today’s event without getting snippets off the twitter feed is to buy the £20 premium live stream, again if I’d known before, probably would have just done that instead and stayed home to watch in, rather than spend 10 hours travelling in one day.

The big thing I’m actually keeping my eyes open for are any new announcements/trailers referring to FFXV. I know this is a FFXIV event, but they’ve made so many announcements for this game already, surely they have nothing left to surprise us with. They do have a couple of 3DS consoles set up in the ‘Adventurers Guild’ room demoing the new theatrythem game, so who knows.

The atmosphere is very pleasant, everyone’s having a good time, the props and cosplay are really good, staff are nice and friendly, and yet I’m afraid I’ll never do this again. Truly is an event for the fans, which I’m afraid I wouldn’t really regard myself as one, regardless of the hundred hours I’ve put into the game, maybe because I get bored easily (I can only play the game for short spurts throughout the year), maybe because I play on a NA server and would never have the chance to meet up with online friends which a lot of users where able to do here, or maybe because I just don’t like crowds. If anything, it’s probably a combination of all three reasons together, which I’m also afraid transitions from this event to why I don’t like really playing the game and have decided to set aside my Gae Bolg.

It’s a shame to make such an announcement on such a wonderful day as today celebrating the game, but I hate getting drawn into time consuming events for the little reward gained. I’ve enjoyed the technical marvel of the brilliant graphics combined with MMO gaming on the PC (and even the PS3), the ARR story was alright (even though some of the characters were either annoying or questionable) and I’ve enjoyed the brilliant attitude of the community. But today has made me come to term with things, I can finally draw a line under this game, and move back into good old fashioned single player campaigning in the upcoming FFXV.